The best Robbie’s in the world

Not sure if this goes for everyone, but the older I get, the faster the time passes.

It is a sort of weird feeling when you think about it, time (and life) just goes by. It does not care about world problems, Covid, what we are trying to achieve in our day to day life, it just goes by and it never stops, not even a second.

When I think about time, I always have this weird story in my mind. I remember when I was a kid, everything seemed to take ages. There are particularly two situations when I felt that – when I use to visit my grandparents, the road there seemed like ages, although it was a one hour drive, and when I used to get a haircut. Damn, the barber seemed to take ages.
As I get older and older, weeks fly by, now it’s March and December is “just around the corner”. That’s how it feels. I guess time lacks any sort of empathy, it just does what he knows best.

But anyway, this is not the point of this article. When I started to write this, I was actually thinking about the last time when we wrote an article here on our blog, and I just realized it’s been a while, that’s how I ended up writing about time.
But, in today’s article, we want to talk about our favourite Robbie’s in the world.

Grab a coffee, HAVE a read, maybe you will discover a new favourite person to inspire you.

Not really a lot to talk about him here, because he is already famous, and you probably know him. And if you don’t, this is your chance to meet him. 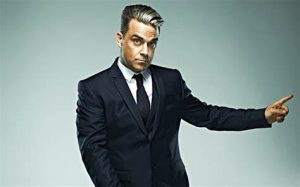 Born in 1974 in Staffordshire, he started his career in 1990, when he became the youngest member to join Take That, an English pop group started in Manchester. Robbie Williams spent 5 years being a part of this band, until 1995, when both parties agreed to split, mostly due to different visions regarding music, as his desire to explore hip-hop and rap conflicted with Take That’s usual ballads.

His solo career started in 1996 when he signed a contract with Chrysalis Records. His debut album “Life thru a lens” was released in 1997 and was positioned number 11 on the UK Albums Chart, eventually managing to sell over 3 million copies in Europe only. The most popular song on this album was “Angels”, his fourth single.

His second album, “I’ve been expecting you” was released in late October 1998 and debuted at number one on the UK Albums Chart. Until the present day, Robbie Williams launched numerous other albums like “The ego has landed“, “Sing when you’re winning” or the more recent one, launched in 2019, “The Christmas Present“.

Throughout his career, he launched a total number of 12 albums.

Robbie William also has a strong interest both in video games and charity work. He recorded the song “It’s only us” as the theme song for FIFA 2000 and he is featured in his own karaoke video game, “We sing Robbie Williams” launched in 2010.
Williams has also set up his own charity in his home town, Stoke-on-Trent, entitled “Give it Sum” its goal being to improve local conditions and strengthen community life.

With the help of his friend Jonathan Wilkes, he annually organised Soccer Aid, a British charity event that raised £38 million in aid for Unicef UK.

Not so famous as our first mention, at least to the general public, our second mention on the list is pretty famous though amongst soccer fans. 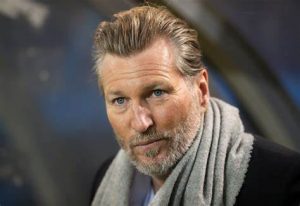 He started his career at Manchester United, playing mostly as a midfielder throughout the years and played for many other clubs including Leicester City, Birmingham City, Blackburn Rovers or Derby County. His international career for Wales started in 1995 as a senior, previously being part of the under-18 and under 21 teams. Savage played a total number of 39 caps, and scored two goals, before retiring in 2005.

Since retiring from football in 2011, Savage focused more on his broadcasting career, and in October 2012, alongside 463 other players, he took part in BBC Radio 5 live’s attempt to set a new Guinness World Record for the “most players in a continuous 5 a side exhibition match”. This was for BBC Children in Need along with comedian Lloyd Langford and BBC Radio 5 Live travel reporter Lindsey Chapman.

Robbie Savage’s father was diagnosed with Pick’s disease, a dementia-type illness, when he was in his mid-50s, and died in 2012. Savage is an ambassador for the dementia care and research charity Alzheimer’s Society.

Our no. 3 mention is an American voice-over actor. mostly famous for providing voices for different animations, audiobooks and video games.

Daymond voice lead character SwaySway in the Nickelodeon program Breadwinners and Blake Myers in the Nick cartoon Get Blake. He also voiced the title character in Marvel’s Spider-Man, which aired originally in 2017, on Disney XD.
In anime and video games, he is best known as the voice of Kayn in League of Legends, Hubert von Vestra in the tactical game Fire Emblem: Three Houses, or Prompto Argentum in Final Fantasy XV.

Once again, not as famous as our no. 1 but pretty well known in anime and video games.
Robbie Daymond currently lives in Los Angeles, and you can read more about him on his personal website, robbiedaymond.com.

Ah, most of you will argue that he is not a “Robbie” but we think he is close and besides, we cannot really skip him. And on top of that, our blog, our rules hahaha.

Robin Williams was an American actor and comedian, known for his improvisational skills, a wide variety of voices and being regarded as one of the best comedians of all time. 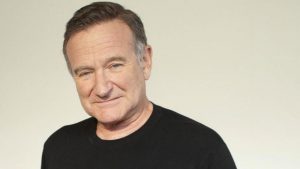 Williams was born in 1951 in Chicago, Illinois and later began his career by performing stand up comedy in the San Francisco Bay Area, with his first performance at the Holy City Zoo, a local comedy club. His debut on TV was in late 1977 on George Schlatter’s revived show Laugh-in.

Although this particular show failed, it paved the way for his television success.
Later on, Williams was cast in one episode of the TV series “Happy Days, my favourite Orkan”, where he impressed the producer with his sense of humour. His appearance proved so popular, that it led to the spin-off television sitcom Mork & Mindy, which ran from 1978 to 1982. Starting in the late 1970s and throughout the 1980s, Williams began to reach a wider audience with his stand-up comedy, including three HBO comedy specials, Off the Wall (1978), An Evening with Robin Williams (1983), and A Night at the Met (1986).

His first major break came from his starring role in the war comedy “Good Morning, Vietnam”, which earned him a nomination for the Academy Award for Best Actor. Many of his roles were in comedies tinged with pathos. Some of his most famous performances included “Dead Poets Society“, “Good Will Hunting“, “Mrs Doubtfire” and many more.
Williams was also an enthusiast of video games, and his daughter Zelda was named after the title character from The Legend of Zelda, a family favourite video games series.

He was also a Co-Founder of Comic Relief USA, an annual HBO television series that raised $80 million as of 2014 for the homeless. Alongside his second wife, Marsha, founded a philanthropic organization called the Windfall Foundation to raise money for many charities.

Although Williams was first recognized as a stand-up comedian and television star, he later became known for acting in film roles of substance and serious drama. He was considered a “national treasure” by many in the entertainment industry and by the public.

Currently, famous just on the App Store and Google Play, Robbie the Robot is a brilliant robot piano player, used to delight his audience with marvellous piano tunes and good vibes. 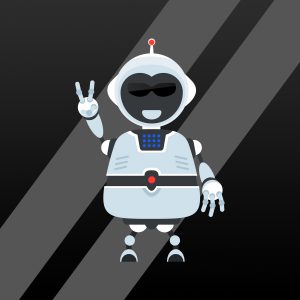 Recently, he got struck by electricity and broke his visual processing unit. Now he is worried that his career as a piano player might be over. Luckily for him, he does not need sight to play his famous tunes. Robbie has all the tunes in his mind, and he just needs human help to play them again.

If you are looking to help Robbie with his goal, you can head over to these two places where he usually hangs out and give him a hand ?

Robbie is awesome, but he is also emphatic. Because he experiences sight loss, he wants to help others out, so he partnered up with SightSavers, donating 50% of his earnings to them.
Sightsavers is a UK based charity that aims to protect sight and fight for disability rights across the globe. Let’s all help Robbie and Sightsavers and fight together, for a better world.

News, updates and interesting gaming stuff on our social media ?

HAVE us on social

Made by Original People